In his article „Contour, Motion and Gesture in Abstract Score Animation: A first Approach“ Moshammer introduces a straightforward method for visualizing musical motion. After giving an overview and a critique of contemporary studies in expressive timing, motion and gesture, he systematizes with analytical brilliance principles of gestural motion and works out theoretical components of motion visualizations.

Arguing with neurological findings, Moshammer states that “it appears … justified to say that music literally expresses movement” (p. 12) and concludes that “if there is motion in music, it should be possible to point out a particular movement it makes” (p. 13). In several linked videos he then presents and discusses different types of his own motion animations set to music from Bach to Brahms.

Truslit with his “classical text about music and motion” (p. 3) was clear a pioneer for Moshammer. He follows him in his concept that motion in music is not reducible to tempo changes alone and borrows his focus on curved lines with loops as an essential characteristic. However, a criticism he makes is that Truslit’s “intuitive differentiation … lacks a reasonable criterion” and states that his approach is “not merely solving the problems raised by Truslit’s speculations, but rather allowing for their better formulation” (p. 23). Further, he sees in Truslit’s concept a limitation to a special musical idiom and a lack of rhythmical diversity because of his postulation of three basic motion forms. It is true that Truslit noticeably focused on, e.g., Wagner’s music in his book, but in his classes he worked with all styles and epochs of traditional played music. Likewise, it was more important for Truslit to achieve his body-musical goal to “capture the big motion forms originating from the body” (Truslit 1938, p. 172) than to focus on smaller motional aspects. 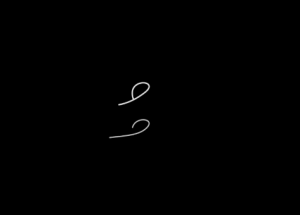 motion lines to the 3rd movement of Brahm’s Symphony No.3. His animation consists mainly of short sequences, starting without connection to the preceding sometimes from left to right, sometimes the other way round. For me, everything appears a little fragmentary. Therefore Moshammers’s motions cannot be related to a greater phrase overarching bodily or kinaesthetic experience. In contrast, Truslit’s lines can be continuously performed, with the arms moving around the body’s centre.

But despite my critique, Moshammer’s animations are very sophisticated and many small loops in his curves indeed seem to fit to the music. His whole approach is a very good step towards motion visualization based on logic and reasoning.