On the 21th August there was as a public screening of Truslit’s film in the Zeughauskino cinema in Berlin. This fantastic arthouse cinema belongs to the Deutsches Historisches Museum (German Historical Museum) and has a special programme for recently rediscovered film documents. The curators of the programme were highly interested in showing Truslit’s educational film “Musik und Bewegung” (Music and Motion) and were quite curious about his line animations synchronized with music.

So almost 70 years after the premier of the film and 50 years after its last public presentation Truslit’s film was back at a real cinema. I had the pleasure introducing the show with a brief overview of Truslit’s life and work.

Due to the screening date during the summer holidays, I had no big expectations about how big an audience would come to the show. But I was quite astonished how many viewers there were and it seemed that most of them already knew about Truslit. So his work really has become quite popular in recent times!

When I entered the theatre before the show, I noticed a wonderful grand piano under the silver screen ready for silent film accompaniments and had the spontaneous idea of  improvising to the second, silent part of Truslit’s film. In this part he explains his laws of motion mostly  exemplified with wildlife shots. Nowadays this part appears a little long, but music makes Truslit’s text and the many beautiful animal observations with spectacular slow motion pictures quite entertaining. Freely accompanying this part was great and I hope to get more chances to repeat it in future! 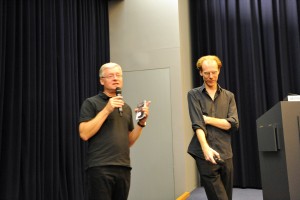 My reprint-colleague Michael Haverkamp travelled to the show from Cologne specially and we both enjoyed the great discussion with many interesting questions from the audience after the showing.